​The most efficient fibre-producing animal in the world

Very ancient breed, there are early references to the Angora goats in Tibet around 2000 BC. The goats were then imported to Turkey in the province of Angora (today Ankara) in the 11th century. The luxurious garments woven with the immaculate fleeces of these goats were highly prized and intended for kings and sultans.

The renown of Mohair craft (derived from Arabic"Mukhayyar" which means "the one chosen, the most beautiful") became more and more important and in the 16th century, Turkish clothes and threads were imported to Europe.

In the 19th century, as the mohair became a valuable product in commerce, France and United Kingdom developed their own mohair industry by importing goats. In the same time, the Angora goats were also imported to the United States, South Africa, Australia and New Zealand.

Alas, since that time, the number of Angora goats has dramatically decreased both nationally and internationally. In Texas, the number of heads went down from 6 millions to 100 000.

In Canada, the number is so low that Angora goats are now considered an endangered breed. Currently, there are fewer than 20 registered Canadian purebred Angora goat breeders.

This decline can be explained by the purchase price of mohair which fall dramatically in the 1990s, the various recessions and monetary crises and last but not least by the globalization which made the fibre mills moved to Asia or chose to work with synthetic fibres or mohair already processed in other countries. 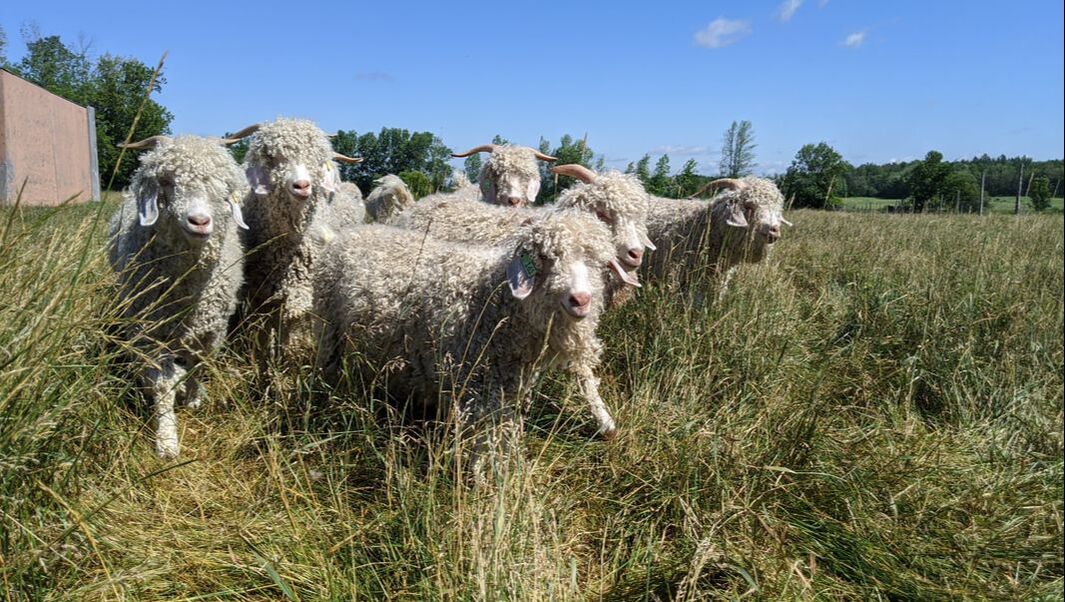 The Angora goat is raised exclusively for the production of mohair. The fleece grows very quickly: about 2.5cm (1 inch) per month.

Shearing is done twice a year: at our farm, we do that in September (this gives time to grow before the cold) and in March (before births). The fleeces weigh between 1.5 kg ( 3 lbs) and 3.5 kg (7lbs) per shearing, depending on the age of the goat.

Both sexes are horned: the horns of the females are curved backwards and those of the males have pronounced spirals that comes back and away from the head. Never dehorn these goats as they could die of overheat under all their fleeces: in fact their horns serve as a cooling system and body temperature regulation.

They have heavy and dropping ears and are covered with hair from head to tail and down to the knees. Their skin is loose and pliable. 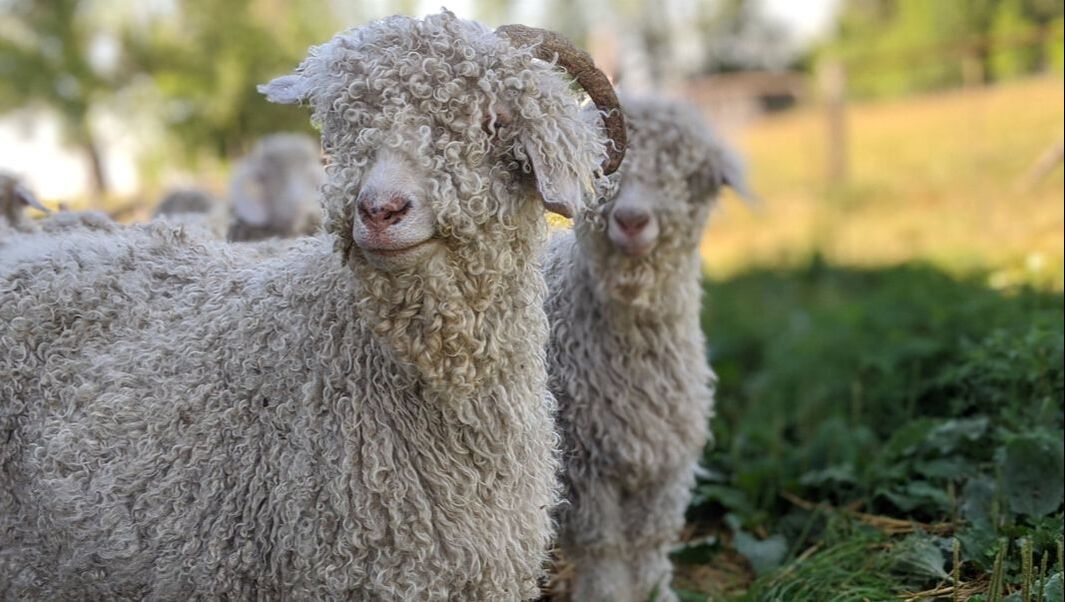 This is later than the other goats breeds. However, we experimented some surprises and since then, we started to separate males and females before they reach their first birthday.

The breeding season is usually from August through January.

As we have a cold barn (and cold winters of course) and want the kidding time happening in April-May, we make sure to present our bucks to our does later in the season (after October).​ 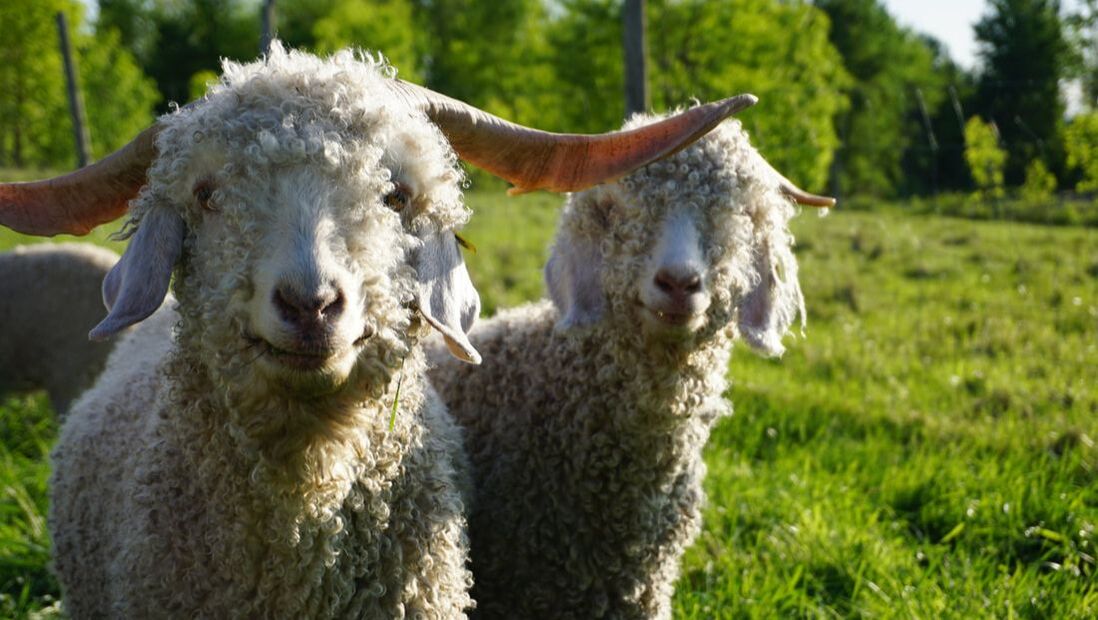 Having a herd of purebred registered Angora goats, and being aware of their precarious position, we take great care to avoid inbreeding by keeping files for each animal.

We also want to improve the genetics of our herd with great breeding animals having good physical conformation and uniform, dense and fine fleeces, whatever the age of the goat.

​Hence the importance of the selection of high quality breeding animals. 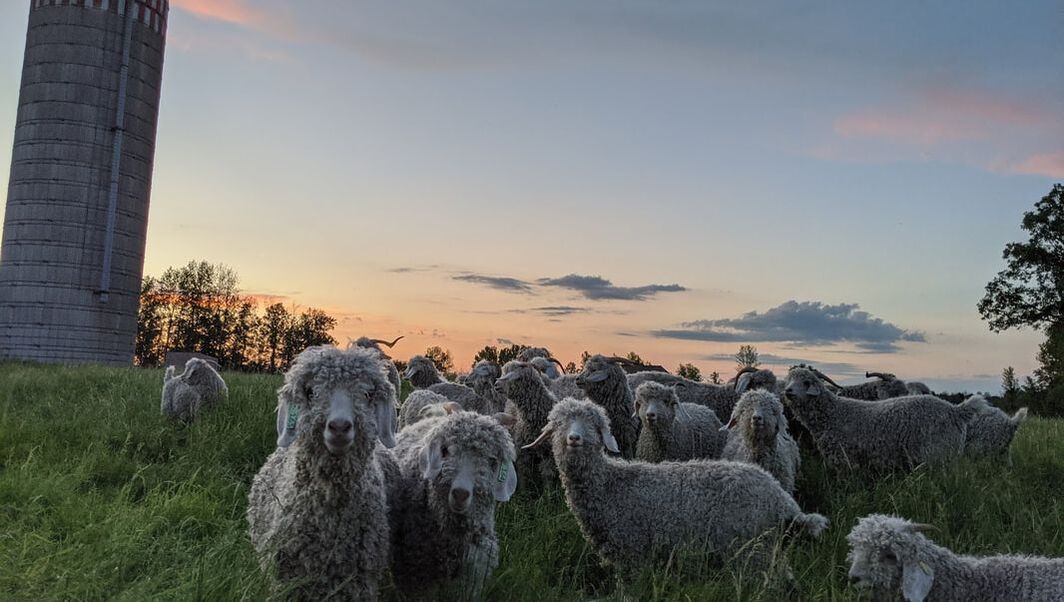 The gestation period is usually 150 days and in general a goat has one to two kids (name of the baby goats), very rarely triplets (in which case, one of them is automatically bottle-fed). It is a period when we are constantly monitoring our future mothers because sometimes we have to intervene to help a birth. And if it goes really bad, we call the vet as soon as possible. It also happens that some mothers reject their kids at birth, in which case we remove them very quickly and bottle-feed them.

As soon as the baby is born, we put the mother and her baby in a small pen ("maternity") with a heating lamp, hay and water. The baby is very sensitive to cold because of his wet mohair locks: he must therefore be warm and dry quickly or he could die.

He weighs between 2 and 3 kg (4 and 06 lbs). The mother and the baby stay in their pen between 24 and 48 hours; so they can bond together, have some rest, and of course the baby will learn to drink (it might happen we have to help them at that stage).

After that time and having tagged the baby with an ear tag, everyone ends up at the "daycare", a pen for the mothers and their babies!

Kids are raised by their mothers. Up to their first year age, we provide our kids a feed ration to prevent coccidiosis ( a parasite common to goats) . This will help them to have good growth.

As soon as the weather permit, they are grazing outside with their mothers and playing with each others.

Then comes the weaning time at three to four months of age.
That give our does time to get back into shape before the next mating.

Angora goats are delicate because the production of mohair all year long requires a lot of energy.

That explains why they are more sensitive than other goats to internal and external parasites. They must therefore be dewormed regularly and special attention will be paid to lice because they can, not only damage their mohair fleeces, but also negatively impact their health. Delousing is done after each shearing and more often if necessary.

The hooves are trimmed regularly so that they can walk easily and do not catch disease or infection.

As for their diet, we give them free choice minerals, salt, kelp in addition to hay or pasture. We also provide some additional feed during gestation, lactation and Winter time.

During Summer, they like to go to the pastures but far prefer to eat brambles, nettles, thistles, burdock rather than clover.

​Dry and clean shelters are available at all times to protect them from rain and heat.

The Angora goat is a charming, docile, small goat who loves human contact.

She is also greedy, curious and loves to apply the popular saying "grass is always greener on the other side". This is not a jumping, escaping or big fighter goat.

And what about these beautiful and long curls that grow on her back. Once the mohair fleeces have been processed, they give magnificent results in terms of lustre, warmth, lightness as well as resistance and elasticity.

We feel privileged to breed these exceptional animals and contribute to enduring their existence while producing one of the most beautiful natural fibres in the world, Mohair.